On view through April 2019
Nancy Jones is a multi-media artist and visual philosopher, based in Berlin.
nancyjonesart.com

I first encountered the remarkable work of Berlin-based artist and thinker Nancy Jones while we were still graduate students in the Swiss Alps of Saas-Fee, Switzerland. Surrounded by the same mountains Friedrich Nietzsche found solace within while tending lifelong migraines and the onset of post-stroke dementia, we studied with some of the world’s most engaged, insightful thinkers, from Judith Butler to Giorgio Agamben, and beyond.

Alongside late night discussions of Walter Benjamin’s articulations of how film, photography, and other mechanical forms of visualization render perceptible that which the naked eye cannot directly perceive, Jones’ spirit photography immediately captured my and her other fellow students’ imaginations. Depicting motion blur apparitions alongside more familiar figures and objects, Jones’ camera work served, at least in our discussions of it, to displace conventional notions of truth and objectivity, opening up questions of the roles of situatedness and belief, with respect to the processes of collective and individual perception.

In her latest, untitled watercolor series, Jones engages the capacity of art to approximate a similar phenomenon, that which feminist philosopher of science Sandra Harding calls “strong objectivity”, or, that form of objectivity which recognizes the locus of enunciation, or the standpoint, of the perceiver, in the process of approximating truth, and laying claim to it as truth. Whereas conventional, liberal truth claims present a Manichean “view from nowhere” and therefore only “weak objectivity”, Harding’s strong objectivity asserts the more radical insight that truth claims that approach the noumenal most closely are always multi-perspectival.

But, whereas Jones’ photographic archive engages a medium typically thought of as documentary, and therefore more centrally concerned with objectivity, watercolor has nearly the opposite reputation–perhaps the most fictionally-associated visual medium of all. And yet, in Jones’ works, fiction is sometimes closer to truth than the seemingly unmediated claims to truth implicit in more mechanical mediums and forms. Whereas photography captures photons within a particular frame, watercolor works in a domain closer to what Markus Gabriel has described as “new realism”, in which fictional and subjective objects are just as real, ultimately, as factual and objective objects.

“Always”, for example, depicts the object of a man in a cap, goatee, t-shirt, and slacks, gazing upon a series of corporate logos for Always, Twitter, Playboy, GE, and John Deere. Of the five, the GE logo is rendered upside down, perhaps reflecting its historical reliance upon nonrenewable energy sources, which has, in recent years, been cited as a source of its instability on the stock market. “Always” and “General”, of course, are rhetorical terms that suggest a kind of universality. But in this image, generality is in question. “Always” is at the top of the list.

“Butterflies” foregrounds a woman with a red purse at her side sitting on a bench, gazing at an automobile with a series of red butterflies fluttering by. The dialectic between the objectivity of the image and subjective, affective sensation within it, is clearly at play. The socially-gendered object of the purse is color matched with the socially-gendered object of the butterflies–whereas the woman, the bench, and the automobile “in themselves” are presented multichromatically, and thereby as closer to the photographic real. And yet, they are all part of a single image, a single truth claim.

“Kitty” presents three girls viewing an image of a cute, wide-eyed cat, emblazoned larger-than-life upon a wall, with the girls’ shadows cast upon the horizontal floor, refracting up the vertical wall. Suggesting the dialectic between pervasive cat memes and videos on social media and their corporeal existence prior to photographic and video capture / distribution, one of the girls’ shadows is split, veering off to both her left and her right, as though two different light sources behind her were casting light upon the observers and the observed, simultaneously.

“Phone Girls”, “Cats and Dogs”, “Phonegod”, “Scene”, “Screen Time”, “Swimmer”, and “Harris” operate in a similar idiom, but here suggesting the rhetorical and imagistic framings of different genders and generations, and how these divergent frames nevertheless operate within a greater, shared reality composed of multiple perspectives. Finally, “Doubletake”, “Litebrite”, “Lightbright”, “Litebrite”, and “Lumins” return the viewer to the central question of perception, and how an overwhelming abundance of light can actually obscure its object, leaving one feeling numb and unable to perceive anything other than the overabundance of presentation itself.

While strong objectivity of the Harding variety is especially useful to engaging Jones’ imagery, the approach to the question found in Laboria Cuboniks’ “Xenofeminist Manifesto” is, by now, even more relevant. As they state in Ox12, “The project of untangling what ought to be from what is, of dissociating freedom from fact, will from knowledge, is, indeed, an infinite  task. There are many lacunae where desire confronts us with the brutality of fact, where beauty is indissociable from truth.  Poetry, sex, technology and pain are incandescent with this tension… but give up on the task of revision, release the reins and slacken that tension, and these filaments instantly dim.”

Jones’ watercolor filaments operate in a domain that might be understood as neither fictional nor nonfictional, but instead as afictional. Rather than operating purely within the domain of fact or purely within that of freedom, they remain within the revisioning process itself, that process within which perception consolidates but is never consolidated, once and for all. Remaining critically open to new perspectives and divergent vantages, Jones’ works embodies the Nietzschean insight that conviction, not artifice, is the greatest enemy of truth.

Jaden Adams is the Co-Founder and Co-Director of The New Centre for Research & Practice and the author of Occupy Time: Technoculture, Immediacy, & Resistance.

Our Artist Series launched in 2015 as a non-commercial gallery and social practice focused on emerging artists mostly in our region to create space for art and dialogue in Georgetown. At times we’ve endeavored to display the purpose of our gallery as much as the work itself. It’s a manner of working that is also evident in our design practice and proposals.

An exhibition of one of one our primary muses is both intentional and misleading. This sub-curatorial approach brings into relief a dual interest in confirming and resisting biography. The use of artist biography for marketing and sequestering of identity is the focus our 2019 Artist Series. These exhibitions will enact personal bias and perform identities. They have been conceived to indulge the ambition of artists and project the personal histories of others as a form of self-portraiture. 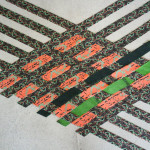